Alabama is an US state that earned its reputation due to its industrial sector, especially steel production. Birmingham took the nickname of Magic City because of its fast developing rhythm. The state is an important cultural pillar. It owns the US Space and Rocket Center and one of the best universities in the US. Its med schools attract a great number of foreign students. 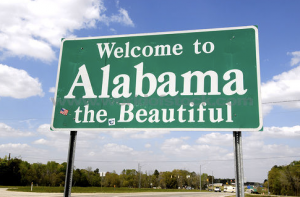 If you’re thinking about visiting, don’t hesitate. Alabama is full of nice, friendly people, who will welcome you with an authentic and thick Southern accent. The locals are infamous for their racism, but that’s only a stereotype. It is funny though to ask a person living here about this misconception: they’ll say Mississippi is actually the culprit, while the latter will say it’s Alabama. The prejudice they’re all uneducated ‘rednecks’ is also false. High schools and colleges in Alabama have achieved high rankings for the past few years among the USA. In the past, a tradition among Southern states said marriage between cousins was a good choice. While most people frown upon it, the laws don’t prohibit it.

There is one thing that remains true about Alabama: their love for football. The people here are calm, kindhearted and friendly. They appear patient and forgiving. All the niceness suddenly disappears when the game starts. Don’t say anything bad about the team, not even if it’s true.

Alabama is perfect for road trips and camping. Explore the Cathedral Caverns and the Dismals Canyon. Rivers and lakes are worth a visit. The Orange Beach is a great city for shopping, for the nightlife or for a sunbath in the summer. For those who would like to know more about Alabama, Birmingham’s Arts Museum has an impressive collection and the Vulcan Statue is one of the largest and most fascinating sculptures in the US. Other attractions include Gaineswood, the Forts, the Battleship Memorial or the US Space and Rocket Center in Huntsville.