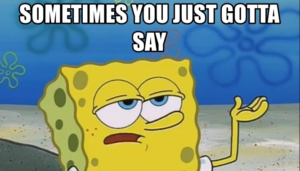 Today life is a bit better than it was a week ago. I realize I may have sounded pretty down in the dumps over the issues with my kid, and frankly, I was. We are still in the throws of it, but there has been an improvement, which makes a huge difference in my outlook for things on the whole.

The entire problem is enough to send any parent into a deep funk anyway, but what had me really bummed is my complete lack of confidence in one part of his treatment team. The direction they were taking things, or should I say lack of direction, and the fact that we had an inexperienced resident practicing on my child was not what I needed to see. After one meeting with this individual, I was disgusted and ready to yank my kid out of their entire program.

For as much as I talk a big story online, I really don’t like conflict. I end up trying to be a diplomatic fool in most cases trying to assuage hurt feelings or avoid them entirely. This was one of those situations where avoidance was not an option; this is my kid’s well being we are talking about. So, for today’s meeting, my wife and I went in with some pretty specific concerns and requests to discuss, possible hurt feelings be darned.

Full of intent and with more than a bit of adrenaline pumping throw my veins anticipating push back on our concerns, we headed into the meeting. After a few formalities, we dived right in. There was little back and forth as we plowed through our recent efforts with our son and the failings we were observing in his treatment and the entire situation at the treatment facility. Then without any dramatic pause that we might have anticipated, the resident fully agreed.

Just like that, we realized she had observed the same lack of effectiveness and the fact that our son didn’t click with her on any level. She was recommended replacing herself with another doctor or moving to an outpatient program as quickly as possible. I was pleasantly surprised.

Though I still don’t feel like she was ready to treat my son, I respected her for recognizing and accepting the fact that she wasn’t the best fit for the situation.

Today life sucks a little less. We actually have a potential timeline to bring my son home and continue his therapy in an outpatient situation. Trials are always easier for me to deal with when there is a light at the end of the tunnel.

So, sometimes you just gotta say it, whatever “it” is. Just like the eBay commercials, right? Often your big anxieties will be solved better if you just take the challenge head-on, even if the challenge is a potentially difficult one.